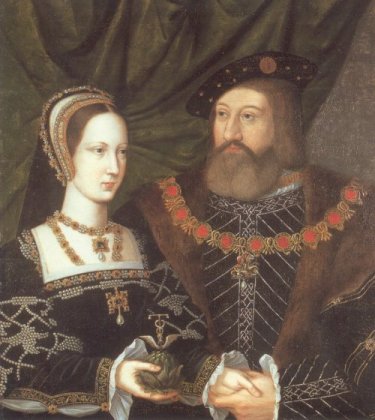 Today is the anniversary of the marriage that originally didn´t go down very well with Henry VIII; that of his sister Mary and who must be called his best friend, Charles Brandon.

I thought this would be the appropriate day to review a book that will be out in a bookstore – or online shop – near you in June: The Tudor Brandons by Sarah-Beth Watkins

When I was first asked to review this book, I have to admit that the question “what more can there possibly be to know about Charles Brandon for anyone who has read a fair bit about Henry VIII and his relationship to this man.

A fair bit, it turns out.

Not least was I ignorant about Charles Brandon´s illustrious grandfather and father, I had no idea, for example that Henry Tudor´s standard bearer at the Battle of Bosworth, the man killed by Richard III himself, was in fact Charles Brandon´s father. But he was.

Truth be told, I would have liked to read more about the two older Brandon´s, but with any luck there will in time be books about them as well.

Another thing that I didn´t know that in spite of chivalric values, Charles Brandon was

But short re-cap. Charles Brandon basically grew up with Henry VIII, raising to fame but not as much fortune as he most likely would have wanted after the ascension of Henry VIII in 1509.

Mary was Henry´s younger sister, for a short while queen of France through her marriage to the more than 30 year older and sickly king Louis XII. Lucky for her, probably, the marriage didn´t last long and her loving brother sent his best friend and trusted companion Charles Brandon to escort her back from France, which he did, but not before he and Mary was married.

There was a problem here, you didn´t just marry the king´s sister and French queen dowager on a whim, and you most certainly didn´t do it without the king´s consent.

The happy couple was however forgiven, and the book The Tudor Brandons for the most part deals with the years Mary and Charles spent together, through ups and downs and fallings out with the most royal of brothers/brothers-in-law.

Sarah-Beth Watkins give a good and well researched account of the couple´s life through births and deaths of their children, through triumphant moments like their participation in the Field of Cloth of Gold and troublesome times such as the brewing war with France only a few years after the grand display itself.

It also makes perfectly clear, in the event someone thought so, that Charles Brandon had a much more important part to play than just being a side-kick to the king, and how he on a number of occasions got firmly on the nerves of Cardinal Wolsey by putting his nose in diplomatic affairs where it didn´t belong, as well as his role in the sentencing of both Thomas More and Anne Boleyn

It also gives insight to the dealings with belated papal dispensations, annulments and legitimacy of the Brandon children at the very some time Henry was working his way through his great matter, at which point Mary herself didn´t have many years left to live and we get to follow Charles through his fourth and last marriage after Mary.

For the reader who has taken a particular interest in the reign of Henry VIII, much of the book will be familiar, but now from the angle of people close to him, with their joys and grievances. It´s a book very much worth reading, and I highly recommend it.